It was great to go to another book launch of another friend this week. Ryders Ridge, by Charlotte Nash, has just hit the bookstores (although Big W released it a couple of weeks earlier). It’s a rural romance set in north-west Queensland. Not my usual sort of reading, but hey, sometimes you have to push your own boundaries. 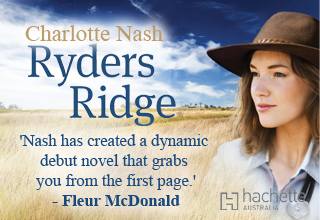 From the back cover blurb: ‘Shaken after a tragic incident in the city hospital where she worked, Daniella figures that the small north-west Queensland cattle town of Ryders Ridge is just the place to hide. Caring and dedicated, she quickly wins the trust of her patients, and the attention of handsome station heir, Mark Walker. As their relationship grows, Daniella begins to think she could make a new life for herself in Ryders. But country towns have their own problems.’

Development Workshop sponsored by the Queensland Writers Centre and Hachette Australia. Ryders Ridge* draws on Charlotte’s medical expertise (she has a degree in medicine) as well as her experience of living for a short time in rural Queensland. Write from what you know…

The prolific author, university lecturer and workshop tutor, Kim Wilkins, launched Ryder’s Ridge with aplomb at Avid Reader bookshop in Brisbane’s West End. Kim’s also a friend of Charlotte, so we heard some inside stories about the development of the book, which was

apparently written over a short period, but followed by a longer editing process. There was a big turnout for the launch, which augurs well for the book’s future. And of course, it’s published by Hachette Australia, who also recently published Fractured, the debut novel of another participant in the 2010 Manuscript Development workshop, Dawn Barker (see my earlier blogs re Fractured). Poppy Gee’s novel, Bay of Fires (another earlier blog topic), is from the same stable.

* I wanted to put an apostrophe in Ryders – must ask Charlotte about that sometime.

I’m frequently asked how my ebook, Extending your use-by date, is selling, especially after the spate of radio

and TV interviews I’ve done in the past few weeks. My answer is: I have no idea. If you publish a print book, there’s a worldwide commercial system called Bookscan that collates sales results weekly; if you publish an ebook, paradoxically there appears to be no centralised collecting agency that records sales. I must be missing something here, but you’d think an ebookseller would be able to register every electronic sale immediately and update the total sales at the same time. Apparently not. So the ability to report on ebook sales lags behind the reporting of print book sales. My publisher, www.xoum.com.au, will be able to give me updates on sales through their site, but it seems I will have to wait for  Amazon.com,  iBookstore and Kobo.