On a recent visit to the National Portrait Gallery in Canberra, I came across an intriguing painting of the Australian writer, Peter Goldsworthy. The photo-like painting shows Goldsworthy sitting at his desk, looking through the window ahead of him, seemingly deep in thought. 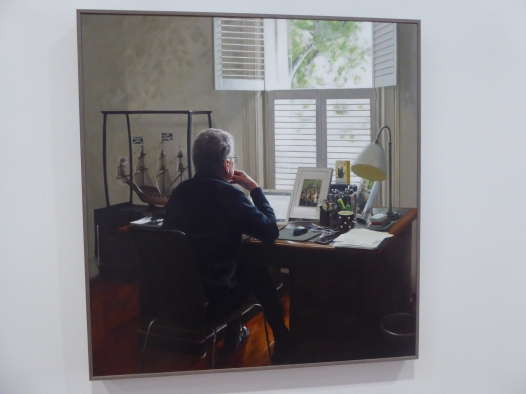 The artist, Deidre But-Husaim, said she chose the angle because she wanted to represent more than just the author’s appearance.

’I wanted to convey the process of trying to bring a thing or idea into being,’ she said, ‘ – a peek at the process and space that is inhabited between the person and resulting end point that we are not usually privy to.’

So her painting is intended to offer ‘a glimpse of the inner private world of Peter alone with his imagination, all unformed possibilities before him.’

‘All unformed possibilities before him’ – what an insightful understanding of the creative process, from someone who no doubt has her own ‘inner private world’ when she paints.

I’m thankful to But-Husaim and her fellow artists at the National Portrait Gallery because I consistently find that other people’s creativity feeds my creativity as a writer.

Whenever I see works of art, or plays or movies that rise to great creative heights, I’m encouraged to push myself higher in whatever writing I’m working on at the time (or pushed to get moving again if I’ve been distracted from it).

I don’t claim that the end result is as inspiring as the creation that triggered my renewed enthusiasm, but at least I have higher aspirations!

Perhaps it was someone else’s creativity that led to my putting together a short story that was published recently in an anthology, ‘Within/Without These Walls’.

The creative non-fiction story, ‘Melons and mudslides’, tells of a day I spent at the iconic sporting venue, the Gabba, more properly known as the Brisbane Cricket Ground.

I think the title of the story will give you some indication that, among the spectators on the Hill, the focus was not always on the game being played out in front. The story begins:

“In those days, the Brisbane Cricket Ground was being redeveloped but wasn’t yet encased in the girdle of concrete grandstands and plastic multi-coloured seating you see today. On the south-east corner there was an uncovered gently sloping grass section – the Hill – set aside for spectators who couldn’t afford a reserved seat and weren’t averse to a glass or three of XXXX either. I find myself heading to the Hill this mid-December day because we’ve booked late, and the one-day match, between Australia and the old enemy, England, is a sell-out.” 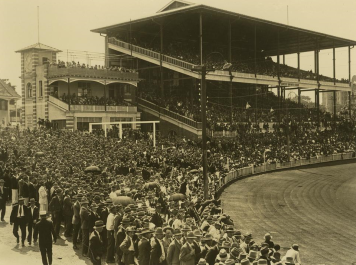 I enjoyed the challenge of conveying in words not only a physical picture of the venue and the tens of thousands of spectators that poured in that day, but also of the atmosphere an international sporting event creates, and of the ebb and flow of the crowd in response to what is happening around them.

When I was writing that story, a painter might have captured a very similar impression of me to the one Deidre But-Husaim painted of Peter Goldsworthy. Full of unformed possibilities. Except that I’d be staring at a wall.

When I sit down to write a book, I do not say to myself, ‘I am going to produce a work of art.’ I write it because there is some lie that I want to expose, some fact to which I want to draw attention, and my initial concern is to get a hearing. ~ George Orwell