Recently I stopped in the Victorian rural town of Corryong, and discovered something about a famous Australian poem, The Man from Snowy River, written in the 1890s by A. B. (Banjo) Paterson.

This stirring poem tells the story of a group of riders in pursuit of a valuable colt that had escaped and joined ‘the wild bush horses’ in rugged mountain country, and how:

When they reached the mountain’s summit, even Clancy* took a pull,

It well might make the boldest hold their breath,

The wild hop scrub grew thickly, and the hidden ground was full

Of wombat holes, and any slip was death.

But the man from Snowy River let the pony have his head,

And he swung his stockwhip round and gave a cheer,

And he raced him down the mountain like a torrent down its bed,

While the others stood and watched in very fear.

Eventually this ‘stripling on a small and weedy beast’ turned the mob of horses around and ‘alone and unassisted brought them back’.

The poem’s continued popularity is due of course to the theme of an heroic individual beating the odds in a rugged environment where the rest of his mates had given up. No wonder there was a movie spin-off.

Paterson always claimed the story was created from several stories he’d heard, but over the years a number of people have claimed to have been or to have known ‘the man from Snowy River’. 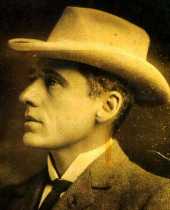 A B (Banjo) Paterson

The town of Corryong sits attractively at the base of the Australian Alps, and it’s easy to see how the area and local characters might have inspired Paterson to set his poem there. (Corryong has claimed the poem as its own, as have a few other towns in the area, but Corryong also has an annual festival).

I learned in my stopover there that the poem was first published in The Bulletin magazine in 1890, but what interested me as a writer was that Paterson kept changing the original slightly, and that the one published in a collection of his poems in 1895 was probably the fourth version.

Apparently W H Auden was also known for continuing to ‘fiddle’ with the text of his poems between editions.

I don’t know whether any modern authors edit their material in this way when new editions appear, but I can’t imagine publishers are too keen on changing the text once it’s set up for printing.

Nevertheless, I know that feeling of sending off the ‘final’ version of a book or short story and later thinking of ways I might have improved it.

I guess the lesson for us lesser writers is that if we can’t make changes after publication, we need to do all the rewriting beforehand. (Except of course for blogs – Caution: This version may not be the original, or the final one …)

*Clancy of the Overflow was another well-known Australian bushman created by Banjo Paterson.

‘In my racket it’s so easy to tighten up and get all stiff and wooden. Then the stuff is no good. When it’s good it comes easy. Anything you have read or heard to the contrary is a lot of mish-mash.’ ~ Character Roger Wade (a writer) in The long good-bye by Raymond Chandler.