To misquote a well-known saying, the road to publication is paved with good intentions.

I certainly had good intentions about maintaining this blog more regularly this year.

My excuse is that I have been too busy doing other things, including quite a lot of writing.

And I am delighted to tell you that one of those writing efforts has been rewarded with publication:

My non-fiction book, The Chalkies: Educating an army for independence, will be published by Australian Scholarly Publishing, Melbourne, on 1st September, 2016. 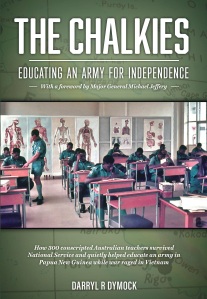 Here’s the back cover blurb:

‘Two years isn’t a long time in your life, but at age 20 it can be significant.

Between 1966 and 1973, while Australian troops were fighting in Vietnam, some 300 conscripted teachers were quietly posted to Papua New Guinea. Colloquially known as ‘Chalkies’, their task was to raise the educational level of troops of the Pacific Islands Regiment in what turned out to be critical years leading up to the country’s independence.

Drawing on the recollections of more than 70 of those National Servicemen, Dr Darryl Dymock, a former Chalkie, tells the story of how these young teachers responded to the challenges of a life most of them never wanted or imagined for themselves, in an exotic land on Australia’s doorstep. It’s a unique tale of the good, the bad and the unexpected, told with flair and insight against the background of political developments of the day.’

Major-General Michael Jeffery, a former Australian Governor-General, and an Army officer in PNG twice during the Chalkies’ time there, has kindly contributed a foreword.

The book can be ordered from Avid Bookshop, Brisbane at a special pre-publication price.

The Chalkies: Educating an army for independence

2 thoughts on “New book: The Chalkies”