There’s an old saying that the road to hell is paved with good intentions. The lack of activity on my blog in recent times has not been due to lack of intention but rather, lack of time. This has been a busy year, including a period spent in the UK, Finland, Sweden and Norway, as well as a short teaching stint in Singapore. Since I believe writers shouldn’t procrastinate, however, I’m determined to restore my regular blog and to let those generous people who were following it know that I have not neglected my writing since I last posted here. So here’s a bumper blog for the restart.

Imagine that you’ve completed your teacher training in an Australian state or territory, and have just spent your first full year in front of a class. The next year, without your willing consent, but with the full force of the law, you’re in the Army. If you’re lucky, you may still be teaching, but not in a school, and not in Australia…

From 1965 to 1973, during the Vietnam War period, almost 64,000 young Australian men were conscripted by ballot into a two-year term of ‘National Service’ with the Australian Army. Over 15,000 of these conscripts were sent to assist the American war effort in Vietnam, but some 300 National Servicemen, who had been school teachers before their call-up, were quietly posted with the Royal Australian Army Educational Corps to the then Territory of Papua New Guinea for roughly 12-month periods. Colloquially known as ‘Chalkies’, the conscripted teachers served in the 3000-strong Pacific Islands Regiment, assisting an Australian Government effort to prepare TPNG for self-government and eventually independence. 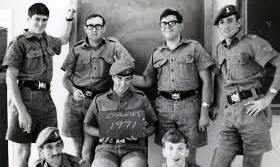 With the aid of an Australian Government Army History Research Grant and a small reference group of ex-Chalkies, I’m currently writing the history of that scheme, drawing on official records (ask me about the frustrations of archival research sometime, when you have an hour or two to spare), historical commentaries, and more recently, the responses of more than 70 ex-Chalkies to a national survey. This is a little-known story, and the recollections of those teachers provide a fascinating picture of young men suddenly catapulted from their school classrooms into the military, of how they survived the experience, and what it meant to them.

I presented a paper about this scheme at an international adult education conference in the UK in July, and am aiming to develop the fuller material into a non-fiction book. As a writer, I’m enjoying the challenge of capturing the diversity of stories, not to mention the humour and sometimes the pathos of individual experiences. Remarkable stories in unique circumstances.

I’ve been meeting every few months with three other writers as a spin-off from a very successful workshop I ran for the Queensland Writers Centre in 2014, ‘Harnessing research for writing’. The four of us discuss our work and read from it, and at the last meeting we also shared our thoughts on a favourite or impactful* book.

To protect their privacy, I won’t mention the other members by name, but they have also been developing their writing: one has finished a novel based on true events in Asia and Australia, and is seeking publication; another has found a satisfying online outlet for his writing, which is based on his particular professional expertise; and the other member of the group is researching a 19th century soldier with American origins and an Australian demise, with the intention of writing a biography. It’s a very supportive and productive group.

*Hand up if you think this is a real word.

If you’ve never heard of Baffle Creek, that’s understandable, especially if you don’t come from the mid-coast of Queensland. I hadn’t heard of it either until Kevin Sommerfeld contacted me to see if I’d be interested in writing a history of the Baffle, as it’s known locally. My name had been suggested to him by Lex Rowland OAM, who chairs the Board of the Hinkler Hall of Aviation in the coastal city of Bundaberg, where Lex ‘launched’ my book, Hustling Hinkler, a little while back.

Baffle Creek, which is more like a river, empties into the sea just north of Bundaberg,

and Kevin grew up in that area.  He’s been assembling historical material for some years,but felt he needed some assistance to write the story. After meeting with Kevin, who lives about an hour’s drive from my place in Brisbane, Queensland, we agreed that I would take the lead in using the material he had collected to write a jointly-authored article for the Queensland History Journal. It was a lot of work, but we beavered away, and the result is a 6000-word peer-reviewed article, ‘Baffle Creek: the changing fortunes of an inland waterway’, which was published in the August 2015 edition of that journal. Kevin and I patted each other on the back via telephone.

In case you haven’t noticed, I’m a strong proponent of lifelong learning (e.g. see my book, Extending your use-by date, and the Griffith Review essay, ‘Working late’), and am currently co-editing a book, Supporting learning across working life: Models, processes and practices, which will be published by the international academic publisher, Springer, later this year.  I’m also contributing as an author to three chapters in that publication.

Finally…
I believe in that adage that writers should also be readers, and read on average a book a week.  Just in case you think from what I’ve written above that I’m only into non-fiction, much of my recreational reading is crime novels and thrillers, and an occasional historical novel. I’m also working on a fiction novel and a couple of short stories, all based on real-life events.

What are you reading at the moment?