This week sees the launch of J K Rowling’s new adult novel, The casual vacancy, after her string of successes with Harry Potter. One evening last week my wife and I went to the well-known independent bookshop, Riverbend, in the Brisbane suburb of Bulimba, to listen to another successful young adult author who’s tried his hand at writing an adult novel.

James Moloney is a full-time Australian author who’s written 38 books for children and young adults. But the other night he was talking about his new adult novel,  The Tower Mill, which is set in Brisbane around anti-apartheid riots directed at the visiting South African rugby team in 1971. I have a signed copy of his book, and am looking forward to reading it, particularly as I was living in Brisbane at the time the book is set. Although based around historical events, however, the book is fictional, and revolves around the relationship between a mother and her son.

I was intrigued by some of what James Moloney said in response to the questions put to him by Riverbend owner, Suzy Wilson (both of whom are mentioned early in the book). Moloney suggested there seemed to be a feeling around that authors who wrote for children finally had to write a book for adults to ‘validate’ their ability as writers. He said that the plot of The Tower Mill had been whirling in his head for 15 years, and he had written it now, not because he needed to validate his writing ability, but because he was ready to write it.

Part of the reason he wrote the book was to vent some of the feelings he had about the role of the Queensland Premier of the day, Joh Bjelke Petersen (later Sir Joh), whose attitudes and actions influenced not only police responses to the anti-apartheid protesters, but the direction of Queensland politics into the mid 1980s. Moloney said he had used some of his young adult novels to examine his own feelings about certain social issues, such as racism. (He quoted a couple of titles and related issues, but I wasn’t taking notes.) 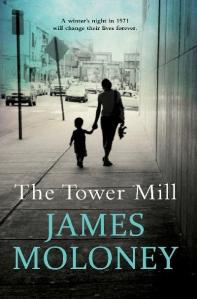 I was also interested to hear James Moloney say he had tried to write the novel in the style of an author he admired, but the UQ Press editors convinced him he should stick to what he did best, telling a story. So even full-time professional experienced authors need, and heed, editorial advice.

In a brief conversation I had with James Moloney, when I compared him and J K Rowling as YA authors writing their first adult novels, he was quick to tell me, smilingly, that he didn’t move in those sorts of circles, but that he admired the British author for the way she had brought children’s literature to the forefront of bookshelves.

[D R Dymock’s biography of pioneer pilot and global adventurer Bert Hinkler will be published by Hachette Australia in 2013. He also has a non-fiction e-book in the wings, and a fiction short story, ‘Walking the Line’, was the Queensland winner in a national competition for Adult Learners’ Week in September.]